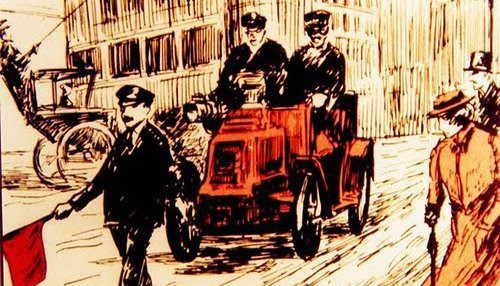 The much-loved genius that is Douglas Adams once said:

I’ve come up with a set of rules that describe our reactions to technologies: 1. Anything that is in the world when you’re born is normal and ordinary and is just a natural part of the way the world works. 2. Anything that’s invented between when you’re fifteen and thirty-five is new and exciting and revolutionary and you can probably get a career in it. 3. Anything invented after you’re thirty-five is against the natural order of things.”

But how true is this today? I heard recently that the pace of change in technology and the speed of its adoption means that there’s a major problem in science fiction: the world is just outmanoeuvring its SciFi thinkers.

If Adams was right about the age at which we think technological advances abhorrent, then I’d clearly be well over the hill. And yet, without too much of a lag (I hope), I adopt new technologies and ways of doing things at home and at work as readily as I did in my 20s and my 30s.

What got me thinking about this is the launch today of #driverless cars in the UK. There’s a lot of suspicion around how they will work. Fair enough. And there’s a heck of a lot that needs to change to make them work safely, properly in the UK and beyond. But, equally, the prize is massive.

Potentially, the UK could be back at the forefront of the automotive industry as we move through this period of testing driverless cars. More importantly, we will see a massive reduction in the loss of human lives as road traffic accidents fall in number computers are better than humans at calculations which is what this all boils down to. In turn, there may well be major drops in insurance costs, and we’re likely to see a shift from the responsibility of the driver towards the responsibility on to the manufacturer.

These are all changes that are hard to process at first, but which will eventually consign to history those ideas we currently hold dear and which eventually become as anachronistic as a man waving a red flag in front of your car.

Finally, I’m proud to say that the city I live in has been chosen to be one of the four in the UK that will test these highly automated cars over the coming months. I for one plan on jumping in one as soon as I’m offered the chance.

This story was originally posted on LinkedIn.